For the fourth consecutive ranking, Singapore has beaten the regional competition to be named fDi’s Asia-Pacific City of the Future. Between 2014 and 2018, the city-state attracted almost 1900 projects – almost one-tenth of all of Asia’s FDI during that period. The city-state’s low unemployment rate and stable inflation have created a healthy economy and contributed to its first place ranking in the Economic Potential category. 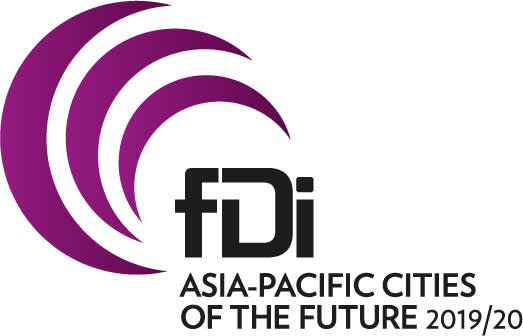 Singapore is a global draw for investors and the US was the source of more FDI projects in the city-state than all other Asian countries combined in the five years to 2018, with more than one-third of this in the software and IT services sector.

Singapore also has a reputation as an innovative hub for investment. US-based Onsophic, which produces change management software and established an office in the city-state in July 2018, attributed this decision to the city’s “very innovative culture”, while business intelligence company Thomson Reuters opened a data and innovation library in Singapore, citing it as “one of the world’s most innovative cities thanks to its focus on collaboration between corporations, government, financial institutions, regulators and academia”.

Singapore tops the Business Friendliness ranking, as companies can start a business there in one-and-a-half days and enjoy a corporate tax rate of 17%. It also performs well in the Ease of Doing Business ranking from the World Bank and the Corruption Perception Index from Transparency.org.

Shanghai rises from fifth position in 2017’s ranking to take second place in 2019. While real estate in other global locations is suffering due to political and economic uncertainty, Shanghai is bucking the trend. Shanghai accounted for 37% of all China’s commercial real estate deals in the first quarter of 2019, while foreign investment in the sector increased significantly between 2014 and 2018, peaking with 28 FDI projects in 2018, up from three in 2014.

InvestHK, supported by a network of 31 global offices, continues to improve its investment promotion efforts through marketing campaigns, seminars and visits to key overseas markets. Innovation remains at the heart of the organisation’s FDI strategy, with dedicated teams for start-ups, fintechs, aftercare and mainland business development. In June 2018, the government launched the Technology Talent Admission Scheme, which enables technology companies or institutes to attract overseas talent in areas including biotechnology, artificial intelligence, cybersecurity and robotics.

Invest Victoria’s head office team of 90 is complemented by 38 investment specialists across 22 global offices – the largest international network by any Australian state. In the last reporting year, Invest Victoria achieved its best results for jobs in eight years and its best capital investment outcome in four years. The agency has implemented initiatives to help bolster investment including the Melbourne Tech City campaign, which promotes its highly skilled tech workforce and position as a leading Asia-Pacific tech hub.

The city of Perth targets growth in key sectors to foster business development and diversify its economy base and revenue streams. In 2018 it launched Think Perth, an investment attraction website focused on education, life sciences, energy, tourism and technology. The city is a member of the World Energy City Partnership, which promotes the exchange of industry knowledge and economic development expertise for investment attraction between its member cities. The organisation has also partnered with AsiaLink Business to facilitate enhanced engagement in Asia.

Brisbane Marketing aims to deliver an integrated industry development and investment attraction programme, with a focus on supporting small businesses and boosting tourism infrastructure investment, along with a dedicated programme targeting the food and agriculture sector. Key initiatives include the Brisbane Future Food Initiative, which aims to advance the city’s capability to build, scale and grow food ventures; the Global Opportunities Initiative, which has identified several opportunity areas where Brisbane has a competitive advantage, including precision medicine, field robotics and property technology; and the Connecting with Asia programme.

The nuance of remote working’s spoils