Brazil’s São Paulo has been named fDi’s Latin American State of the Future for 2018/19. Located on the country’s south-eastern coast, São Paulo – the most populous state in the study – ranks first for both Economic Potential and Business Friendliness. It boasted the highest GDP of all locations analysed and was the most attractive state in the region for foreign investors between 2013 and 2017. 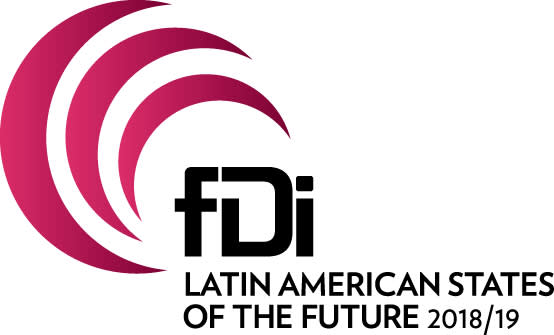 According to data from greenfield investment monitor fDi Markets, 592 companies invested in 659 projects in the state in the review period. In recent years, São Paulo has received major investments from US-based New Generation Power, which invested more than $900m with joint-venture partner Grupo Léros in a photovoltaic power facility in Taubaté, and Spain-based call-centre operator Atento, which hired 3000 people for its new contact centre facility in Guarulhos.

São Paulo is home to more companies in knowledge-based sectors than any other state in the region, contributing to its first place in the Business Friendliness category. P3 Ingenieurgesellschaft, a Germany-based engineering and consulting company, attributed its decision to open an office in São Paulo in 2016 to the state’s reputation as a leading technology and research centre within Latin America.

Second ranked Buenos Aires Autonomous City state hosts Argentina’s capital city and is home to more than 3 million people. The state is creative and innovative, with the highest proportion of third-level students of all Latin American states and the highest registration of patents on a per capita basis. Buenos Aires Autonomous City boasts 33 higher education colleges and universities and 21 International Baccalaureate schools, helping it to rank first in the Human Capital and Lifestyle category.

US-based CloudHesive, which provides cloud computing solutions, credited its November 2017 decision to open an office in the state to its reputation for innovation. Buenos Aires Autonomous City was chosen due to the “eagerness of the technical community to be leaders in Latam and drive innovation”.

Mexico City District (formerly known as the Federal District) boasted the third highest level of GDP of all 171 Latin American states analysed (more than $347m at purchasing power parity rate) and ranks third overall. One of the most accessible areas in the region, investors from 56 international destinations can reach the district directly, where sales, marketing and support operations make up the majority of the business activities from inward investors, accounting for more than 40% of all investment in the state between 2013 and 2017.

To create a shortlist for the fDi Latin American States of the Future 2018/19 ranking, the fDi Intelligence division of the Financial Times collected data using the specialist online FDI tools fDi Benchmark and fDi Markets as well as other sources. Data was collected for 171 locations under five categories: Economic Potential, Human Capital and Lifesytle, Cost Effectiveness, Connectivity and Business Friendliness. Locations scored up to a maximum of 10 points for each data point, which were weighted by importance to the FDI decision making process in order to compile both the subcategory rankings as well as the overall Latin American States of the Future 2018/19 ranking.

In addition, surveys were collected under a sixth category, FDI Strategy, for which there were 32 submissions. Locations that ranked in the top 10 in this category were given bonus points, which contributed to their overall score. Together, the data subcategory rankings and the FDI Strategy ranking make up the overall Latin American States of the Future 2018/19 ranking.

“fDi’s recognition of Minas Gerais’ ability to attract investment is a direct result of the state-created business environment. To make it more competitive, FIEMG works with the productive sector and the public sector to generate opportunities. Companies are taking advantage of these opportunities, such as Embraer, Google, and Hyperloop.”

Flavio Roscoe, president, Federation of Industries of the State of Minas Gerais

“It is highly gratifying for us to receive this acknowledgment; it highlights the challenge and the opportunity to keep making San Luis Potosi an attractive investment destination. We need to focus not only on our current strengths, such as the automotive and appliances industries, but also to diversify our economy by showing that we are a competitive location for all kinds of investments.”

“The challenges imposed by the current economic and political scenario require a new positioning and new institutional goals. In this context, and in order to better target INDI’s efforts, we seek to strengthen the Minas Gerais economy by attracting new investments, by strengthening the companies that are already in the state of Minas Gerais and by promoting exports from the state. We do this through the development of the competitiveness of business in the State and market intelligence, with a careful look at the strategic sectors and a leading role in the connection with other entities of the State in order to give full support to the implementation of investments and the development of the businesses in the state of Minas Gerais giving security, reliability of information and knowledge of the characteristics of Minas Gerais.”

‘We are not fast enough in accepting the new reality’